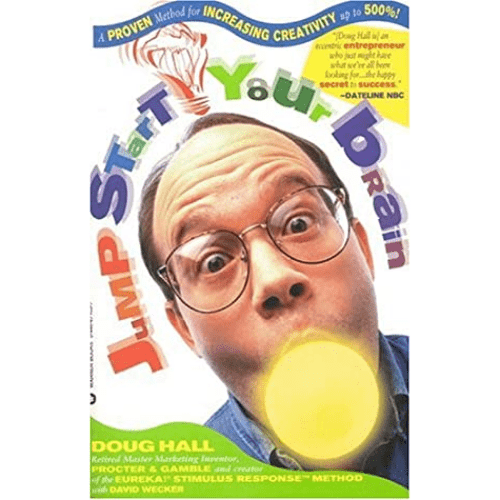 A successful marketing manager and product inventor who has served as a consultant for such companies as Proctor & Gamble, Pepsi-Co., and Walt Disney challenges conventional ways of thinking and reveals how to successfully market new ideas.
show more

Condition : Used Book This is a used book. We do our best to provide good quality books for you to read, but there is no escaping the fact that it has been owned and read by someone else previously. Therefore it will show signs of wear and may be an ex library book
Add to basket
Get it by Monday 28th November
Free deliveryabove KES 2500

A successful marketing manager and product inventor who has served as a consultant for such companies as Proctor & Gamble, Pepsi-Co., and Walt Disney challenges conventional ways of thinking and reveals how to successfully market new ideas.
show more

Doug Hall has been named one of America’s top experts on business growth by “Inc. Magazine,” “A&E Top 10,” “CIO Magazine,” “The Wall Street Journal” and “DATELINE NBC.” Doug started his entrepreneurial career at the age of twelve developing and marketing a line of learn to juggle kits and magic tricks. After earning a degree in chemical engineering, he joined Procter and Gamble, where he rose to the rank of Master Marketing Inventor and in one twelve-month period developed and introduced a record nine new business initiatives. After ten years at P&G he retired to pursue his vision of the American dream. With three credit cards for financing and his basement as his office, he founded what is today known as the Eureka! Ranch. Doug’s focus on data-proven methods has earned the Eureka! Ranch an 88% client repeat rate since its founding in 1986. A national study found the average U.S. household uses 18 products or services that Doug and his team have helped develop. Following six years of R&D, Doug founded Merwyn Technology. Merwyn is a patent-pending computer model that helps managers make smarter marketing and business development decisions. “Fortune Small Business” magazine named Merwyn “one of the top emerging technologies in America.” Today, Doug is on a quest to share his data-proven wisdom with owners of businesses of all sizes. The Canadian TV show “Venture” had this to say about Doug: “Hall is a corporate Robin Hood. He takes from his big corporate clients and gives to small businesses. This super consultant helps entrepreneurs rebuild their businesses.” Doug and his family split their time between a 170-year-old homestead in Cincinnati, Ohio, USA, and a 140-year-old farmhouse in Springbrook, Prince Edward Island, Canada.

The Girls from Ames : A Story of Women and a Forty-Year Friendship

In Pharaoh's Army : Memories of the Lost War

Where Dreams Die Hard : A Small American Town and Its Six-man Football Team

The Sikh Religion and the Sikh People

Putting the One Minute Manager to Work: How to Tur Turn the 3 Secrets into Skills

House of Stone: A Memoir of Home, Family, and a Lost Middle East

The Teaching of Christ : A Catholic Catechism for Adults

A Lotus Grows in the Mud

Eat Fat, Lose Weight: The Right Fats Can Make You Thin for Life

Your Best Life Now : 7 Steps to Living at Your Full Potential

Grandes Horizontales: The Lives and Legends of Four Nineteenth-Century Courtesans

Making Rounds with Oscar : The Extraordinary Gift of an Ordinary Cat

The Truths We Hold : An American Journey

Blink : The Power of Thinking Without Thinking

Luckiest Man : The Life and Death of Lou Gehrig

Just One More Thing : Before You Leave Home

Inner Healing Through Healing of Memories

Nothing to Be Frightened of

It Sucked and Then I Cried : How I Had a Baby, a Breakdown, and a Much Needed Margarita

The Survivors Club : The Secrets and Science That Could Save Your Life

First Feelings : Milestones in the Emotional Development of Your Baby and Child

Southern by the Grace of God

Liberty and Tyranny : A Conservative Manifesto

Wonderful Names of Our Wonderful Lord

The Christian Book of Mystical Verse

Building Blocks for Bible Study : Laying a Foundation for Li