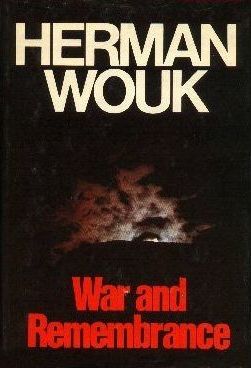 War and Remembrance by Herman Wouk

Condition : Used Book This is a used book. We do our best to provide good quality books for you to read, but there is no escaping the fact that it has been owned and read by someone else previously. Therefore it will show signs of wear and may be an ex library book
Add to basket
Get it by Monday 5th December
Free deliveryabove KES 5000

Herman Wouk was a bestselling, Pulitzer Prize-winning Jewish American author with a number of notable novels to his credit, including The Caine Mutiny, The Winds of War, and War and Remembrance.

Herman Wouk was born in New York City into a Jewish family that had emigrated from Russia. After a childhood and adolescence in the Bronx and a high school diploma from Townsend Harris High School, he earned a B.A. from Columbia University in 1934, where he was a member of the Pi Lambda Phi fraternity and studied under philosopher Irwin Edman. Soon thereafter, he became a radio dramatist, working in David Freedman's "Joke Factory" and later with Fred Allen for five years and then, in 1941, for the United States government, writing radio spots to sell war bonds. He lived a fairly secular lifestyle in his early 20s before deciding to return to a more traditional Jewish way of life, modeled after that of his grandfather, in his mid-20s.

Wouk joined the United States Navy and served in the Pacific Theater, an experience he later characterized as educational; "I learned about machinery, I learned how men behaved under pressure, and I learned about Americans." Wouk served as an officer aboard two destroyer minesweepers (DMS), the USS Zane and USS Southard, becoming executive officer of the latter. He started writing a novel, Aurora Dawn, during off-duty hours aboard ship. Wouk sent a copy of the opening chapters to Irwin Edman who quoted a few pages verbatim to a New York editor. The result was a publisher's contract sent to Wouk's ship, then off the coast of Okinawa. The novel was published in 1947 and became a Book of the Month Club main selection. His second novel, City Boy, proved to be a commercial disappointment at the time of its initial publication in 1948.

While writing his next novel, Wouk read each chapter as it was completed to his wife, who remarked at one point that if they didn't like this one, he'd better take up another line of work (a line he would give to the character of the editor Jeannie Fry in his 1962 novel Youngblood Hawke). The novel, The Caine Mutiny (1951), went on to win the Pulitzer Prize. A huge best-seller, drawing from his wartime experiences aboard minesweepers during World War II, The Caine Mutiny was adapted by the author into a Broadway play called The Caine Mutiny Court Martial, and was later made into a film, with Humphrey Bogart portraying Lt. Commander Philip Francis Queeg, captain of the fictional USS Caine. Some Navy personnel complained at the time that Wouk had taken every twitch of every commanding officer in the Navy and put them all into one character, but Captain Queeg has endured as one of the great characters in American fiction.

He married Betty Sarah Brown in 1945, with whom he had three sons: Abraham, Nathanial, and Joseph. He became a fulltime writer in 1946 to support his growing family. His first-born son, Abraham Isaac Wouk, died in a tragic accident as a child; Wouk later dedicated War and Remembrance (1978) to him with the Biblical words, "He will destroy death forever."

In 1998, Wouk received the Guardian of Zion Award.

The Hope : A Novel

War and Remembrance by Herman Wouk

Inside, Outside by Herman Wouk

The Winds of War

The Hindu View Of Life

The Greater Journey : Americans in Paris

The Power of Positive Thinking

Public Enemies : Dueling Writers Take On Each Other and the World

Directors in Rehearsal : A Hidden World

Taking Charge : Caring Discipline That Works at Home and at School

Come Into My Chambers: Experiencing Intimacy with God

Forging a President : How the Wild West Created Teddy Roosevelt

Multiple Blessings : Surviving to Thriving with Twins and Sextuplets

Abraham : A Journey to the Heart of Three Faiths

Land and Power in Hawaii : The Democratic Years

In Sam We Trust : The Untold Story of Sam Walton and How Wal-Mart is Devouring America

The Scientist in the Crib : What Early Learning Tells Us Abo

The Pilates Powerhouse : The Total Body Sculpting System for Losing Weight and Reshaping Your Body from Head to Toe

Emotional Rescue : The Theory and Practice of a Feminist Father

It's all Too Much: An Easy Plan for Living a Richer Life With Less Stuff

Gabriela Mistral : The Poet and Her Work

All Our Yesterdays : A Century of Family Life in an American Small Town

The Bad Girl's Guide to the Party Life

Let Me Stand At Your Side

The Best Bash Book : It's a God Thing!