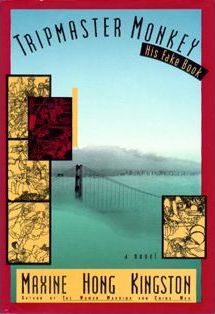 She was born as Maxine Ting Ting Hong to a laundry house owner in Stockton, California. She was the third of eight children, and the first among them born in the United States. Her mother trained as a midwife at the To Keung School of Midwifery in Canton. Her father had been brought up a scholar and taught in his village of Sun Woi, near Canton. Tom left China for America in 1924 and took a job in a laundry.

Her works often reflect on her cultural heritage and blend fiction with non-fiction. Among her works are The Woman Warrior (1976), awarded the National Book Critics Circle Award for Nonfiction, and China Men (1980), which was awarded the 1981 National Book Award. She has written one novel, Tripmaster Monkey, a story depicting a character based on the mythical Chinese character Sun Wu Kong. Her most recent books are To Be The Poet and The Fifth Book of Peace.

She was awarded the 1997 National Humanities Medal by President of the United States Bill Clinton. Kingston was a member of the committee to choose the design for the California commemorative quarter. She was arrested in March 2003 in Washington, D.C., for crossing a police line during a protest against the war in Iraq. In April, 2007, Hong Kingston was awarded the Northern California Book Award Special Award in Publishing for her most recent novel Veterans of War, Veterans of Peace (2006), edited by Maxine Hong Kingston.

She married actor Earl Kingston in 1962 (IMDb bio); they have had one child, Joseph Lawrence Chung Mei, born in 1964. They now live in Oakland.

Kingston was honored as a 175th Speaker Series writer at Emma Willard School in September 2005.

By the Beautiful Sea : The Rise and High Times of That Great American Resort, Atlantic City

Tracking From the Ground Up

Raising Kids for True Greatness : Redefine Success for You and Your Child

A Great Improvisation : Franklin, France, and the Birth of America

Getting America Back to Work

Back to Basics in Church Growth

The Light Will Dawn ... Through Prayer

Adult Children Who Won't Grow Up : How to Finally Cut the Cord That Binds You

Let There Be Laughter : A Treasury of Great Jewish Humor and What It Means

Bacon: A Love Story : A Salty Survey of Everybody's Favorite

Prayer is Good Medicine : How to Reap the Healing Benefits of Prayer

Clara the Early Years : The Story of the Pug Who Ruled My Life

Collecting Football Cards for Fun and Profit : How to Buy, Store and Trade Them - And Keep Track of Their Value as Investments

The Encyclopaedia Sherlockiana, Or, a Universal Dictionary of the State of Knowledge of Sherlock Holmes and His Biographer John H. Watson M.D

The Way : Walking in the Footsteps of Jesus

Attitude is Everything : 10 Life-Changing Steps to Turning Attitude into Action

ZEN Wrapped in Karma and Dipped in Chocolate

True Spirituality: How to Live for Jesus Moment by Moment

The Divorced Mom's Guide to Dating : How to be Loved, Adored and Cherished

The Good Man Jesus and the Scoundrel Christ

The Floor of Heaven : A True Tale of the Last Frontier and the Yukon Gold Rush

Letters to a Youth Worker

Elizabeth Bishop : Life and the Memory of It

If the Church Were Christian : Rediscovering the Values of Jesus

The Tipping Point : How Little Things Can Make a Difference

Historical Criticism of the Bible : Methodology or Ideology?

Climbing Everest: A Meditation on Mountaineering and the Spirit of Adventure

You Can't be Neutral on a Moving Train : A Personal History of Our Times

The Canary Sang But Couldn't Fly : The Fatal Fall of Abe Reles, the Mobster Who Shattered Murder, Inc.'s Code of Silence