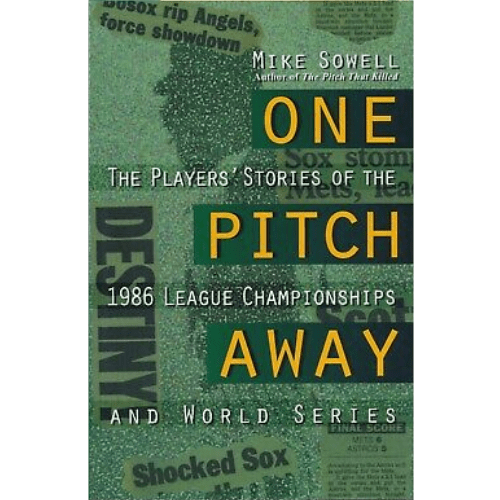 One Pitch away: the Players' Stories of the 1986 L Eague Cham

An inside-the-dugout account, based on interviews with the key players among the Angels, Astros, Mets and Red Sox, of a remarkable season and arguably the most spectacular comeback in the history of the sport.
show more

An inside-the-dugout account, based on interviews with the key players among the Angels, Astros, Mets and Red Sox, of a remarkable season and arguably the most spectacular comeback in the history of the sport.
show more

Mike Sowell is a sports historian and the author of three baseball books, including The Pitch That Killed about Ray Chapman and Carl Mays. Named a Notable Book of the Year by The New York Times in 1989,[citation needed] and winner of the CASEY Award for best baseball book of 1989,[1] The Pitch That Killed tells the story of the only on-field fatality in major league baseball history, when the Yankees' Mays beaned the Indians' Chapman in the final weeks of the 1920 American League pennant race.[2]

Sowell also wrote about baseball tragedies in his other books. One Pitch Away, about the 1986 baseball postseason and the key players involved, featured Donnie Moore, the Angels pitcher whose suicide two years later was linked to his role in the 1986 ALCS, and Bill Buckner, whose 20-year career was tainted by missing a ground ball in Game 6 of the World Series.[3] July 2, 1903 explored the mysterious death of Hall-of-Famer Ed Delahanty, who died after being swept over Niagara Falls.[4]

In addition to his books and articles on baseball history, Sowell wrote the text for Cardtoons, a set of baseball parody cards that led to a lawsuit with the Major League Baseball Players Association.[5][6] In Cardtoons v. MLBPA, the court ruled in 1996 that the cards parodying the players and their greed were protected by the First Amendment.[7][8]

Sowell, a former sportswriter for the Tulsa Tribune,[2] is now a journalism professor at Oklahoma State University.[9] He was inducted into the Oklahoma Journalism Hall of Fame in 2007.[10][11

One Pitch away: the Players' Stories of the 1986 L Eague Cham

California and Other States of Grace : A Memoir

Presto! : How I Made Over 100 Pounds Disappear and Other Magical Tales

James Henry Moser: His Brush and His Pen

Everyday Osho : 365 Daily Meditations for the Here and Now

Prayer is Good Medicine : How to Reap the Healing Benefits of Prayer

Tracking From the Ground Up

Get What You Want!

The Elusive Transformation : Science, Technology, and the Evolution of International Politics

All My Best Friends

House of Stone: A Memoir of Home, Family, and a Lost Middle East

What Color Is Your Parachute? 2014

Sweet and Low : A Family Story

Youth Must Fly: Gliding and Soaring for America

Honeymoon with My Brother : A Memoir

Steering by Starlight : The Science and Magic of Finding Your Destiny

Divine Soul Mind Body Healing and Transmission System : The Divine Way to Heal You, Humanity, Mother Earth, and All Universes

My Kind of Place : Travel Stories from a Woman Who's Been Everywhere

Sign My Name to Freedom : A Memoir of a Pioneering Life

In Search of Cool Group : War, Flight and Homecoming in Northeast Africa

What to Expect When You're Expecting

Weekend Makeover : Take Your Home from Messy to Magnificent in Only 48 Hours!

American Fire : Love, Arson, and Life in a Vanishing Land