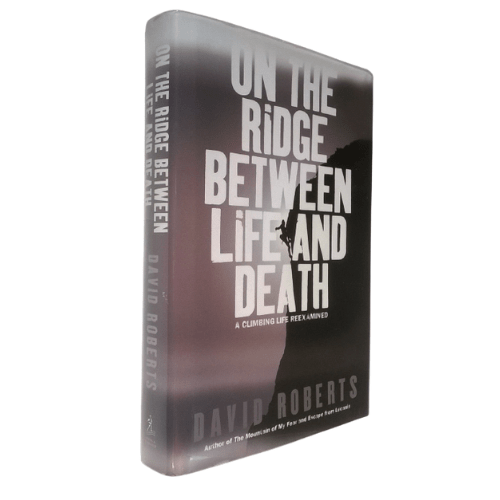 On the Ridge Between Life and Death : A Climbing Life Reexamined

Condition : Used Book This is a used book. We do our best to provide good quality books for you to read, but there is no escaping the fact that it has been owned and read by someone else previously. Therefore it will show signs of wear and may be an ex library book
Add to basket
Get it by Today 03 AM - 6 PM (For orders within Nairobi only )
Free deliveryabove KES 5000

On the Ridge Between Life and Death : A Climbing Life Reexamined

The More Deceived : The Sixth in the Lord Edward Corinth and Verity Browne Murder Mystery Series

Finding Everett Ruess : the Life and Unsolved Disappearance of a Legendary Wilderness Explore

Our Story : 77 Hours That Tested Our Friendship and Our Faith

Wesley the Owl : The Remarkable Love Story of an Owl and His Girl

What We've Lost : How the Bush Administration Has Curtailed Our Freedoms, Mortgaged Our Economy, Ravaged Our Environment, and Damaged Our Standing in the World

The Girls from Ames : A Story of Women and a Forty-Year Friendship

My Point (and I Do Have One)

Rich for Good : The How and Why of Wealth God's Way

Legacy : Paying The Price For The Clinton Years

More Than Victims : Battered Women, the Syndrome Society, and the Law

Having It All : Love, Success, Sex, Money, Even If You're Starting with Nothing

The Tie That Binds : Meditations for Mothers and Daughters

The Untouched Key : Tracing Childhood Trauma in Creativity and Destructiveness

The Light and the Glory for Children

Golf Can't be this Simple: The Swing

Planting Missional Churches : Your Guide to Starting Churches that Multiply

How Democracies Die : The International Bestseller: What History Reveals About Our Future

The Great Polar Fraud : Cook, Peary, and Byrd? How Three American Heroes Duped the World into Thinking They Had Reached the North Pole

Venus in Blue Jeans : Why Mothers and Daughters Need to Talk about Sex

Dear Girls Above Me : Inspired by a True Story