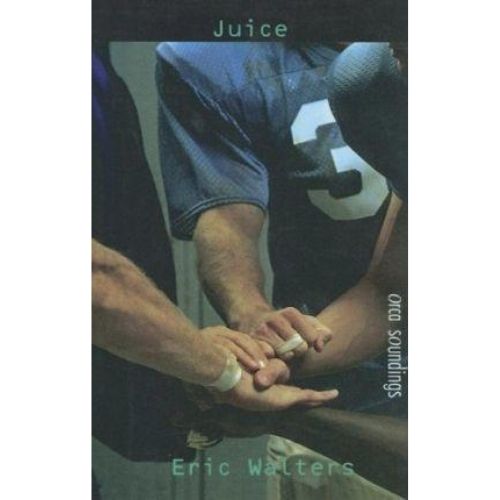 Moose must decide if he should risk taking steroids to become a big star on the football team.

Condition : Used Book This is a used book. We do our best to provide good quality books for you to read, but there is no escaping the fact that it has been owned and read by someone else previously. Therefore it will show signs of wear and may be an ex library book
Add to basket
Get it by Today 12 PM - 6 PM (For orders within Nairobi only )
Free deliveryabove KES 5000

Moose must decide if he should risk taking steroids to become a big star on the football team.

Eric was born in Toronto in 1957, which makes him "real old". But, as Eric says, "Just because I have to grow old doesn't mean that I have to grow up!" In his many roles as parent, teacher, social worker, youth sports coach and writer he is in constant contact with children and young adults. He draws from these experiences and feels that this helps him to capture the realistic interaction between young people - the conflicts, tensions, stresses and interests that make up their lives.

Eric began his writing as a teacher. He taught in classes from kindergarten up and his stories often reflect the curriculum that he was teaching. He always read stories - picture books and novels - to his students and this helped him to understand what children liked, responded to, and were inspired by. He enjoys the enthusiasm of his students and often looks at them to provide him with the inspiration to pursue a particular topic in both the classroom and in his writing.

Eric tries to write every day. When he has a story idea he starts with research. This could involve reading books, watching a documentary, or trying to experience the things that his characters are going to go through. This could include rock climbing or riding white water (for STARS), spending time in a wheelchair (Rebound), playing and walking with tigers (Tiger By The Tail), hanging around a tough biker bar (Diamonds in the Rough), standing out in his backyard in a blizzard wearing a T-shirt and shorts (Trapped In Ice), or traveling to Africa (Alexandria of Africa).

"The most important thing anybody ever told me about writing was to write what you know . . . and the only way to get to know things is to do your homework and research before you write," Eric stated.

Once the writing begins the story is always playing around in his head. He takes any opportunity, even if it's just a few minutes between presentations, to put things down, either with pen and paper or on his laptop.

Prior to entering teaching and writing Eric was a social worker (B.S.W., M.S.W., B.A.Hons - specialized major psychology). He worked in a variety of settings including child welfare, private practice, a mental health centre, and, for twenty years on a part-time basis as a Crisis Social Worker in an emergency department. He stopped teaching 4 years ago and left the ER only last year.

The majority of Eric's time is spent in the company of his wife, children and dogs (Lola a big standard poodle and a little white dog named Winnie The Poodle).

Branding : The Power of Market Identity

Old Ironsides : Eagle of the Sea

My History : A Memoir of Growing Up

The John Wooden Pyramid of Success: The Authorized Biography, Philosophy and Ultimate Guide to Life, Leadership, Friendship and Love of the Greatest Coach in the History of Sports

Dilbert and the Way of the Weasel

The Power of Being a Woman : Embracing the Triumph of the Feminine Spirit

Under the Tuscan Sun : At Home in Italy

Love in Times of Reformation

Mindset: The New Psychology of Success

Mind at a Time : America's Top Learning Expert Shows How Every Child Can Succeed

The Messages of the Lady of All Nations

The Source of My Strength : Relying on the Life-Changing Power of Jesus Christ to Heal Our Wounded Hearts

Who? What? When? Where? Why? : A Substantial Gathering of Intriguing & Delightful Knowledge

A Wardrobe from the King: 8 Studies on the ARMOR of GOD

The Business of Changing Lives : How One Company Took the Information Superhighway to the Inner City

Contemplating Adultery : The Secret Life of a Victorian Woman

Creating the Beloved Community : A Handbook for Spiritual Leadership

Global Advantage on the Internet : From Corporate Connectivity to International Competitiveness

The Wounded Woman : Hope and Healing for Those who Hurt

After Jesus: The Triumph of Christianity

The Little Way of Ruthie Leming : A Southern Girl, a Small T

Our Oldest Enemy : A History of America's Disastrous Relationship with France

All My Best Friends

Follow Me : More Meditations for Private and Group Worship

The Mark Inside: A Perfect Swindle, a Cunning Revenge, and a Small History of the Big Con

Under His Wings: and Other Places of Refuge

God's Kingdom of a Thousand Years Has Approached