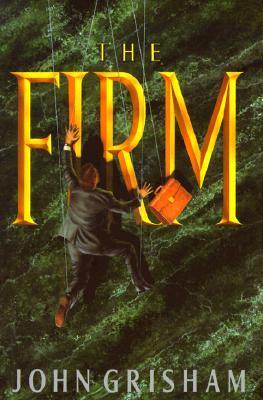 The Firm by John Grisham

#1 NEW YORK TIMES BEST SELLER - At the top of his class at Harvard Law, he had his choice of the best in America. He made a deadly mistake.

When Mitch McDeere signed on with Bendini, Lambert & Locke of Memphis, he thought he and his beautiful wife, Abby, were on their way. The firm leased him a BMW, paid off his school loans, arranged a mortgage and hired him a decorator. Mitch McDeere should have remembered what his brother Ray--doing fifteen years in a Tennessee jail--already knew. You never get nothing for nothing. Now the FBI has the lowdown on Mitch's firm and needs his help. Mitch is caught between a rock and a hard place, with no choice--if he wants to live.
show more

Condition : Used Book This is a used book. We do our best to provide good quality books for you to read, but there is no escaping the fact that it has been owned and read by someone else previously. Therefore it will show signs of wear and may be an ex library book
Out of stock Add to wishlist

#1 NEW YORK TIMES BEST SELLER - At the top of his class at Harvard Law, he had his choice of the best in America. He made a deadly mistake.

When Mitch McDeere signed on with Bendini, Lambert & Locke of Memphis, he thought he and his beautiful wife, Abby, were on their way. The firm leased him a BMW, paid off his school loans, arranged a mortgage and hired him a decorator. Mitch McDeere should have remembered what his brother Ray--doing fifteen years in a Tennessee jail--already knew. You never get nothing for nothing. Now the FBI has the lowdown on Mitch's firm and needs his help. Mitch is caught between a rock and a hard place, with no choice--if he wants to live.
show more

Long before his name became synonymous with the modern legal thriller, John Grisham was working 60-70 hours a week at a small Southaven, Mississippi law practice, squeezing in time before going to the office and during courtroom recesses to work on his hobby--writing his first novel.Born on February 8, 1955 in Jonesboro, Arkansas, to a construction worker and a homemaker, John Grisham as a child dreamed of being a professional baseball player. Realizing he didn't have the right stuff for a pro career, he shifted gears and majored in accounting at Mississippi State University. After graduating from law school at Ole Miss in 1981, he went on to practice law for nearly a decade in Southaven, specializing in criminal defense and personal injury litigation.One day at the DeSoto County courthouse, Grisham overheard the harrowing testimony of a twelve-year-old rape victim and was inspired to start a novel exploring what would have happened if the girl's father had murdered her assailants. Getting up at 5 a.m. every day to get in several hours of writing time before heading off to work, Grisham spent three years on A Time to Kill and finished it in 1987. Initially rejected by many publishers, it was eventually bought by Wynwood Press, who gave it a modest 5,000 copy printing and published it in June 1988.That might have put an end to Grishams hobby. However, he had already begun his next book, and it would quickly turn that hobby into a new full-time career. When he sold the film rights to The Firm to Paramount Pictures for $600,000, Grisham suddenly became a hot property among publishers, and book rights were bought by Doubleday. Spending 47 weeks on The New York Times bestseller list, The Firm became the bestselling novel of 1991.The successes of The Pelican Brief, which hit number one on the New York Times bestseller list, and The Client, which debuted at number one, confirmed Grisham's reputation as the master of the legal thriller. Grisham's success even renewed interest in A Time to Kill, which was republished in hardcover by Doubleday and then in paperback by Dell. This time around, it was a bestseller.Since first publishing A Time to Kill in 1988, Grisham has written one book a year. His other books are The Firm, The Pelican Brief, The Client, The Chamber, The Rainmaker, The Runaway Jury, The Partner, The Street Lawyer, The Testament, The Brethren, A Painted House, Skipping Christmas, The Summons, The King of Torts, Bleachers, The Last Juror, The Broker, Playing for Pizza,The Appeal, The Associate, Ford County, The Confession, The Litigators, Calico Joe, The Racketeer, Sycamore Row, Gray Mountain, and Rogue Lawyer. All of them have become international bestsellers. In addition he has written six novels for Young Adult readers: Theodore Boone: Kid Lawyer, Theodore Boone: The Abduction, Theodore Boone: The Accused, Theodore Boone: The Activist, Theodore Boone: The Fugitive, and Theodore Boone: The Scandal (2016). There are currently over 300 million John Grisham books in print worldwide, which have been translated into 29 languages. The Innocent Man (October 2006) marked his first foray into non-fiction, and Ford County (November 2009) was his first short story collection. Partners (March 2016) was his first original digital short story. Nine of his novels have been turned into films (The Firm, The Pelican Brief, The Client, A Time to Kill, The Rainmaker, The Chamber, A Painted House, The Runaway Jury, and Skipping Christmas), as was an original screenplay, The Gingerbread Man.Grisham took time off from writing for several months in 1996 to return, after a five-year hiatus, to the courtroom. He was honoring a commitment made before he had retired from the law to become a full-time writer: representing the family of a railroad brakeman killed when he was pinned between two cars. Preparing his case with the same passion and dedication as his books' protagonists, Grisham successfully argued his clients' case, earning them a jury award of $683,500--the biggest verdict of his career.When he's not writing, Grisham devotes time to charitable causes, including most recently his Rebuild The Coast Fund, which raised 8.8 million dollars for Gulf Coast relief in the wake of Hurricane Katrina. He also keeps up with his greatest passion: baseball. The man who dreamed of being a professional baseball player now serves as the local Little League commissioner. The six ballfields he built on his property have played host to over 350 kids on 26 Little League teams. show more

The King of Torts

The Associate by John Grisham

A Time to Kill by John Grisham

The Innocent Man : Murder and Injustice in a Small Town

The Firm by John Grisham

Playing For Pizza : A Novel

Disappointment with God : Three Questions No One Asks Aloud

A Case of Child Murder : Law and Science in Nineteenth-century Tuscany

Strategy for Triumph, a Christian Perspective on Problems

First We Have Coffee

Women of the Wild West

Tweak : Growing Up on Methamphetamines

All Our Yesterdays : A Century of Family Life in an American Small Town

The Vision of His Glory : Finding Hope through the Revelation of Jesus Christ

Parents and Children (God's Design for the Family)

The education of the Mexican-American

Germs That Won't Die : Medical Consequences of the Misuse of Antibiotics

In War's Dark Shadow : The Russians Before the Great War

Ragman and Other Cries of Faith

America the Beautiful : Rediscovering What Made This Nation Great

Jesus - Why the World is Still Fascinated by Him

Hype and Glory; a True Account by the Only Person to Have Been a Judge at Both the Cannes.......

The Man Who Never Was

It Sucked and Then I Cried : How I Had a Baby, a Breakdown, and a Much Needed Margarita

Worship : More Than Just a Song

A Praying Life : Connecting with God in a Distracting World

The Vatican Diaries : A Behind-The-Scenes Look at the Power, Personalities and Politics at the Heart O F the Catholic Church

The Way : Walking in the Footsteps of Jesus

The Tipping Point : How Little Things Can Make a Difference

James Henry Moser: His Brush and His Pen