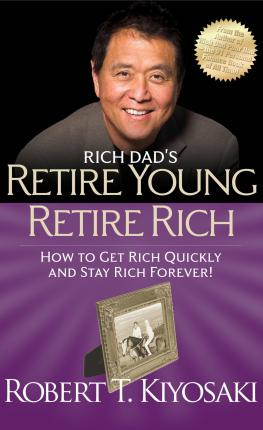 If you don't plan on working hard all your life this is the book for you. If you're ready to retire (or would like to retire early enough to enjoy the retirement years) you can learn from Robert's story of how he and his wife Kim started with nothing and 'retired' financially free in less than 10 years.
show more

Condition : New Book This is a new book - be the first to read this copy. With untouched pages and a perfect binding, your brand new copy is ready to be opened for the first time
Add to basket
Get it by Friday 3rd February
Free deliveryabove KES 5000

If you don't plan on working hard all your life this is the book for you. If you're ready to retire (or would like to retire early enough to enjoy the retirement years) you can learn from Robert's story of how he and his wife Kim started with nothing and 'retired' financially free in less than 10 years.
show more

Robert Kiyosaki, author of Rich Dad Poor Dad - the international runaway bestseller that has held a top spot on the New York Times bestsellers list for over six years - is an investor, entrepreneur and educator whose perspectives on money and investing fly in the face of conventional wisdom. He has, virtually single-handedly, challenged and changed the way tens of millions, around the world, think about money.In communicating his point of view on why 'old' advice - get a good job, save money, get out of debt, invest for the long term, and diversify - is 'bad' (both obsolete and flawed) advice, Robert has earned a reputation for straight talk, irreverence and courage.Rich Dad Poor Dad ranks as the longest-running bestseller on all four of the lists that report to Publisher's Weekly - The New York Times, Business Week, The Wall Street Journal and USA Today - and was named "USA Today's #1 Money Book" two years in a row. It is the third longest-running 'how-to' best seller of all time.Translated into 51 languages and available in 109 countries, the Rich Dad series has sold over 27 million copies worldwide and has dominated best sellers lists across Asia, Australia, South America, Mexico and Europe. In 2005, Robert was inducted into Amazon.com Hall of Fame as one of that bookseller's Top 25 Authors. There are currently 26 books in the Rich Dad series.In 2006 Robert teamed up with Donald Trump to co-author Why We Want You To Be Rich - Two Men - One Message. It debuted at #1 on The New York Times bestsellers list.Robert writes a bi-weekly column - 'Why the Rich Are Getting Richer' - for Yahoo! Finance and a monthly column titled 'Rich Returns' for Entrepreneur magazine.Prior to writing Rich Dad Poor Dad, Robert created the educational board game CASHFLOW 101 to teach individuals the financial and investment strategies that his rich dad spent years teaching him. It was those same strategies that allowed Robert to retire at age 47.Today there are more that 2,100 CASHFLOW Clubs - game groups independent of the Rich Dad Company - in cities throughout the world.Born and raised in Hawaii, Robert Kiyosaki is a fourth-generation Japanese-American. After graduating from college in New York, Robert joined the Marine Corps and served in Vietnam as an officer and helicopter gunship pilot. Following the war, Robert went to work in sales for Xerox Corporation and, in 1977, started a company that brought the first nylon and Velcro 'surfer wallets' to market. He founded an international education company in 1985 that taught business and investing to tens of thousands of students throughout the world.  In 1994 Robert sold his business and, through his investments, was able to retire at the age of 47. During his short-lived retirement he wrote Rich Dad Poor Dad. show more

Rich Dad's Before You Quit Your Job

Rich Dad's Guide to Investing : What the Rich Invest in, Tha

The Business of the 21st Century

Rich Dad's Advisors : How to Buy and Sell a Business: How You Can Win in the Business Quadrant

Scientists Who Believe : 21 Tell Their Own Stories

Scriptless : What I Learned about God on the Las Vegas Strip

How to Set and Achieve Your Financial Goals

God in the Alley : Being and Seeing Jesus in a Broken World

The Brotherhood of Joseph : A Father's Memoir of Infertility and Adoption in the 21st Century

Aztlan and Viet Nam : Chicano and Chicana Experiences of the War

Do It Right! Best Practices for Serving Young Adults in School and Public Libraries

Men at Work: the Craft of Baseball

Fox's Book of Martyrs : A History of the Lives, Sufferings, and Deaths of the Early Christian and Protestant Martyrs

You Can't Make This Up : Miracles, Memories, And The Perfect Marriage Of Sports And Television

Surrounded by Psychopaths : or, How to Stop Being Exploited by Others

7 : An Experimental Mutiny Against Excess

The Second Twentieth Century : How the Information Revolution Shapes Business, States, and Nations

Safe in the Shepherd's Arms

A Pirate Looks at Fifty

How to Study Your Bible

Surfing Tsunamis of Change - A Handbook for Change Agents

The Big Book of Baseball Brainteasers

Aristotle and an Aardvark Go to Washington : Understanding Political Doublespeak Through Philosophy and Jokes

Wesley the Owl : The Remarkable Love Story of an Owl and His Girl

In a Cause That Will Triumph: The Goldwater Campaign and the Future of Conservatism

Red Moon Rising : How 24-7 Prayer Is Awakening a Generation

First Person Plural : My Life as a Multiple

Molecules of Emotion The Science Behind Mind Body Medicine

The Scholastic Encyclopedia of the Presidents and Their Times

The Church Can Change The World : Living from the Inside Out

Fourth and Long : The Fight for the Soul of College Football