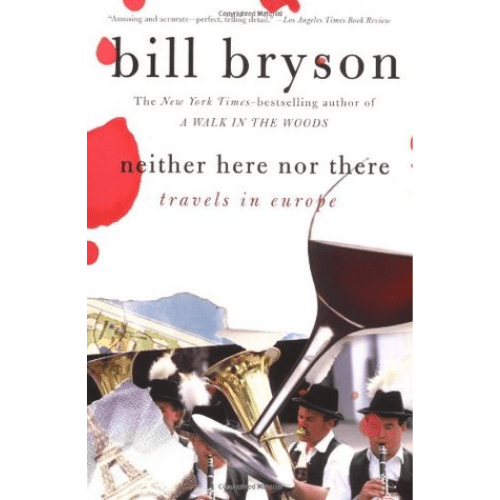 In the early seventies, Bill Bryson backpacked across Europe--in search of enlightenment, beer, and women. He was accompanied by an unforgettable sidekick named Stephen Katz (who will be gloriously familiar to readers of Bryson's A Walk in the Woods). Twenty years later, he decided to retrace his journey. The result is the affectionate and riotously funny Neither Here Nor There.

Condition : Used Book This is a used book. We do our best to provide good quality books for you to read, but there is no escaping the fact that it has been owned and read by someone else previously. Therefore it will show signs of wear and may be an ex library book
Add to basket
Get it by Today 04 AM - 6 PM (For orders within Nairobi only )
Free deliveryabove KES 5000

In the early seventies, Bill Bryson backpacked across Europe--in search of enlightenment, beer, and women. He was accompanied by an unforgettable sidekick named Stephen Katz (who will be gloriously familiar to readers of Bryson's A Walk in the Woods). Twenty years later, he decided to retrace his journey. The result is the affectionate and riotously funny Neither Here Nor There.

William McGuire "Bill" Bryson, OBE, FRS was born in Des Moines, Iowa, in 1951. He settled in England in 1977, and worked in journalism until he became a full time writer. He lived for many years with his English wife and four children in North Yorkshire. He and his family then moved to New Hampshire in America for a few years, but they have now returned to live in the UK.

In The Lost Continent, Bill Bryson's hilarious first travel book, he chronicled a trip in his mother's Chevy around small town America. It was followed by Neither Here Nor There, an account of his first trip around Europe. Other travel books include the massive bestseller Notes From a Small Island, which won the 2003 World Book Day National Poll to find the book which best represented modern England, followed by A Walk in the Woods (in which Stephen Katz, his travel companion from Neither Here Nor There, made a welcome reappearance), Notes From a Big Country and Down Under.

Bill Bryson has also written several highly praised books on the English language, including Mother Tongue and Made in America. In his last book, he turned his attention to science. A Short History of Nearly Everything was lauded with critical acclaim, and became a huge bestseller. It was shortlisted for the Samuel Johnson Prize, before going on to win the Aventis Prize for Science Books and the Descartes Science Communication Prize. His next book, The Life and Times of the Thunderbolt Kid, is a memoir of growing up in 1950s America, featuring another appearance from his old friend Stephen Katz. October 8 sees the publication of A Really Short History of Nearly Everything.

The Mother Tongue : English and How It Got That Way

A Short History of Nearly Everything

The Life and Times of the Thunderbolt Kid : A Memoir

Originals : How Non-conformists Change the World

Never Check E-mail in the Morning : And Other Unexpected Strategies for Making Your Work Life Work

Unbearable Lightness : A Story of Loss and Gain

Outliers : The Story of Success

That Was Ernest : The Story of Ernest Holmes and the Religious Science Movement (Pen Markings)

How I Got This Way

A Wardrobe from the King: 8 Studies on the ARMOR of GOD

French Women Don't Get Fat : The Secret of Eating for Pleasure

The John Wooden Pyramid of Success: The Authorized Biography, Philosophy and Ultimate Guide to Life, Leadership, Friendship and Love of the Greatest Coach in the History of Sports

Getting even: Handling conflict so that both sides win

The Age of Turbulence : Adventures in a New World

Listen, Liberal : Or, What Ever Happened to the Party of the People?

Getting in by Standing Out : The New Rules for Admission to America's Best Colleges

Aztlan and Viet Nam : Chicano and Chicana Experiences of the War

The Bad Girl's Guide to the Party Life

The Catholic Faith Handbook for Youth

Freedoms Daughters : The Unsung Heroines of the Civil Rights Movement

The Learning Tree : Overcoming Learning Disabilities from the Ground Up

Toward God: The Ancient Wisdom of Western Prayer

Dao De Jing : The Book of the Way

Talking with Children about Loss

Strapless : John Singer Sargent and the Fall of Madame X

My History : A Memoir of Growing Up

Why You Act the Way You Do